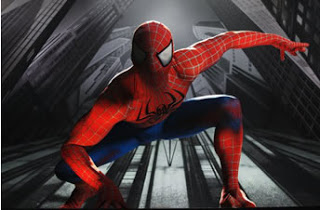 Drawing from over 40 years of Marvel comic books for inspiration, Spiderman – Turn Off The Dark, spins a new take on the mythic tale of Peter Parker, a teenager whose unremarkable life in Queen’s is turned upside down – literally – when he’s bitten by a genetically altered spider and wakes up the next morning clinging to the ceiling.
Bullied by his classmates and tortured by an unrelenting crush on next-door-neighbor Jane Watson, this science geek discovers he has been endowed with astonishing powers.
He soon learns, however, that “with great power comes great responsibility.”  Maligned by the media, buffetted by financial woes, and stretched thin by the expectations of the world-at-large, Peter now must struggle to navigate the perilous and peculiar demands of being a web-slinging superhero.
With the charcters in Turn Off The Dark ranging from old familiar favorites to super villains never-before imagined, Spider-Man’s battles will hurtle the audience through a story both recognizable and unexpected, culminating in an eye-popping , ultimate test for this iconic figure.
Dates
Previews from: 28 November 2010
Opening night: 14 June 2011
Audience
Spiderman is a musical that can be enjoyed by children aged 8 and upwards. Everyone entering the Foxwoods Theater must have a ticket, regardless of age. There is a 4 year minimum age requirement for the Foxwoods Theater. Everyone (including children of all ages) must have a ticket for entry.
Location
The Foxwoods Theatre, which opened in 1997 as the Ford Center for the Performing Arts, was designed to adhere to the guidelines for development established by The New 42nd Street to “promote the preservation, restoration and reconstruction of the historically significant elements of each theater”.
The challenge was to find a way to take two theaters that had many magnificent design elements but were sadly deficient in most all areas required for a Broadway musical house such as, seating capacity, size of stage, proscenium opening, handicapped access, dressing rooms, lobby areas, public toilets to name a few and create a theater that adhered to the guidelines.
The product of collaboration between architects, engineers, craftsmen and designers, including Beyer Blinder Belle and the Roger Morgan Studio (now Sachs Morgan Studio), the design combines preservation with state of the art new construction to create the spirit and character of a great old theater with the needs of a modern one.
The Foxwoods Theatre incorporates many elements from the Apollo and Lyric theaters. First, these include the Lyric’s magnificent turn of the century 42nd and 3rd street facades which will be restored to their original grandeur.
Second, key historic interior elements of the Apollo were used in the theater, these included the lobby which was restored and is used as a lounge during intermission and plaster elements were cut into sections, removed from the Apollo, restored, and reinstalled in the new theater. These included ceiling domes, the proscenium arch, sail vault, and side boxes. These latter elements were expanded to fit the scale of the larger theater.
The theater’s interior design theme is based on the reinstalled historic elements from the Apollo. The historic dome is set within a new second dome and washed with light to feature it as the theater’s centerpiece. The dome, proscenium, and side boxes are painted and gilded to be the featured design elements. The side walls design of pilasters and scalloped panels were first established by the structural grid and acoustical considerations and then designed as supporting elements in a sympathetic manner and in a similar vocabulary to the historic elements. New murals were commissioned to form a frieze over the new side boxes in a Greek mythological theme recalling the original concept of the Apollo.
Run time
2 hours 45 minutes, which includes one 15 minute intermission.
Transport
213 West 42nd Street